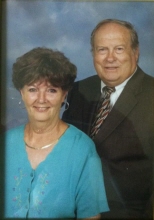 Carl F. Winsor
A Mass of Christian Burial for longtime Lamar resident, Carl F. Winsor, was held at 10:00 AM, Thursday, January 30, 2014 at the St. Francis de Sales/Our Lady of Guadalupe Catholic Church in Lamar with Reverend Charles Sena as Celebrant. Burial  followed in the Fairmount Cemetery in Lamar with full Military Honors under the auspices of the Lamar V.F.W. Post # 3621.

Carl was born on March 21, 1932 at Springfield, Colorado to Fred Cecil and Carrie Mirie (Kett) Winsor and passed away on January 24, 2014 at his home in Lamar with his family by his side at the age of 81.

He is preceded in death by his parents, granddaughter; Bobbi Castle and sister; Mary Fern Gregory.

Carl is survived by his wife; Patsy of the family home in Lamar, children; Kett (Nancy) Winsor, Jim Winsor, Stephanie (Lloyd) Martinson all of Lamar and Suzanne (Bill) Travis of McClave, grandchildren; Clairissa, Mark, Kristen, Bryan, Andreya and Brenna. He is also survived by his great-granddaughter; Mylenna, sister; Mabel Mirie Austin of Arvada, CO as well as numerous other family and a host of friends.

Memorial contributions may be made to the Lamar Area Hospice either direct or in care of the Peacock Funeral Home.
To order memorial trees or send flowers to the family in memory of Carl F. Winsor, please visit our flower store.