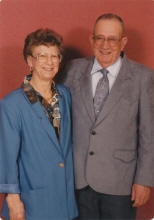 A funeral service for lifetime McClave resident, Bonnie J. Earl, will be held at 11:00 AM Wednesday September 23, 2015 at the McClave United Methodist Church.  Burial will follow in the McClave Cemetery in McClave, Colorado.

Bonnie J. Earl was born on September 19, 1925 in Lamar, Colorado to Fred Arthur Hoffman and Grace Lee Gist-Hoffman and departed this life on Saturday September 19, 2015 at the Holly Nursing Care Center in Holly Colorado at the age of 90.

Bonnie Earl is preceded in death by her parents; by her husband – Clarence D. “Fuzzy” Earl; by one grandson – James Kipling Earl; by one great grandson – Tanner Eberhardt; by one brother – Harold Lee Hoffman and by one nephew – Rick Hoffman.

The family respectfully requests that in lieu of flowers, memorial contributions be made to the McClave United Methodist Church or to a charity of one’s choice either directly or through the funeral home office.
To order memorial trees or send flowers to the family in memory of Bonnie Earl, please visit our flower store.