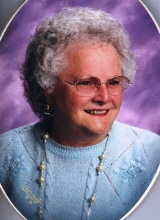 A celebration of life funeral service for lifetime Lamar resident, Betty L. Scriven was held at 10:00 AM Tuesday December 31, 2013 at the Lamar Christian Church with Ray Matteson and Ian Blacker co-officiating the service.  Burial followed in the Fairmount Cemetery in Lamar.

Visitation for Betty was held from 2:00 PM to 7:00 PM Monday December 30, 2013 at the Peacock Family Chapel in Lamar and prior to the service at the church.

Betty was born on March 30, 1937 in Lamar, Colorado to Virgil and Gladys (Bridges) Bolinger and departed this life on Thursday December 26, 2013 at her home in Lamar with her family by her side at the age of 76.

Betty was preceded in death by her parents; by one daughter – Pamela Dawn Scriven; by two infant sisters – Idella Gladys Bolinger and Evelyn Pearl Bolinger; by her brothers – Richard Bolinger and William Bolinger; by one brother – Robert Tempel; and two sisters-in-law – Evelyn Bolinger and Ann Bolinger.

Betty is survived by her husband – Lester Scriven of the family home in Lamar; by two children – David (Barbara) Scriven of Lamar and Melinda (Dale) Jagger of Las Animas, CO; by one grandson – Zachary Scriven also of Lamar; by one sister – Ethel Tempel of Wiley; also surviving are numerous nieces, to include a special niece – Pamela Jean Scriven of Denver, nephews, cousins, other relatives, and many friends.

Those desiring may make memorial contributions to the Lamar Area Hospice either directly or through the funeral home office.
To order memorial trees or send flowers to the family in memory of Betty L. Scriven, please visit our flower store.