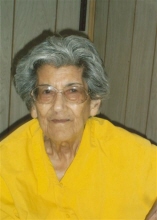 Bernadine Godinez
A Funeral Mass for longtime Lamar resident, Bernadine Godinez was held at 10:00 AM, Wednesday, October 23, 2013 at St. Francis De Sales/Our Lady of Guadalupe Catholic Church. A Rosary Service was held prior to the Mass at 9:30 AM also at the church with Deacon Allan Medina reciting. A Rite of Committal followed the church services at Riverside Cemetery.
Visitation for Mrs. Godinez was held from 1:00 PM to 5:00 PM, Tuesday, October 22, 2013 at the funeral home.
Bernadine was born on April 11, 1919 at Do
ñ
a, NM to Pantaleon and Maria (Flores) Rocha and went to be with her Lord and Savior in the early morning hours of Saturday, October 19, 2013 at Prowers Medical Center with her family at her side. Mrs. Godinez was 94.
She is preceded in death by her parents, her husband Russell Godinez on August 8, 1994 her daughter Virginia on October 31, 2012 as well an infant son.
Mrs. Godinez is survived by her children: Daniel (Theresa) Godinez of Parker, CO, Frank (Juanita) Godinez of Lamar and Vivian (James) Abitia of Pueblo, CO. She is also survived by 8 grandchildren; Sean, Kimberly, Thomas, Tracy, Jason, Andrea, Sabrina and Vanessa. She is also survived by 18 great grandchildren, her special friend Mercedes Hernandez as well as other relatives and friends.
To order memorial trees or send flowers to the family in memory of Bernadine Godinez, please visit our flower store.