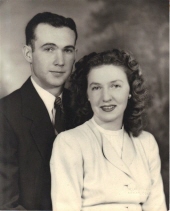 A Celebration of Life for longtime Lamar resident, Barbara Bell was held at 10:00AM on Friday, June 28, 2013 at the Peacock Family Chapel with Ian Blacker of the Lamar Christian Church officiating. Interment for Barbara Bell followed at the Veteran’s Section at Fairmount Cemetery where the Lamar V.F.W. Post #3621 will also perform Military Honors for Barbara’s husband, Clyde “Bud” Bell who passed away on July 12, 2011.

She is preceded in death by her husband; Clyde “Bud” Bell, Jr., her parents and daughter; Mary Ann Bamber.

Barbara is survived by her son; Billy (Cindy) Bell of Imperial Beach, CA, grandchildren; Brett, Brian and Gycell as well as her three great-grandchildren.
To order memorial trees or send flowers to the family in memory of Barbara Bell, please visit our flower store.