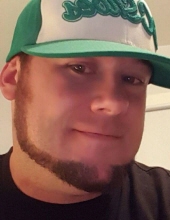 Per Alan’s request cremation will take place and there will be no visitation.

He is preceded in death by his paternal grandparents, Willard and Marion Palmer, cousin, Erik Mittler and uncle, Virgil Palmer.

Alan is survived by his son, Easton Palmer, his parents, Randy and Kathy Palmer all Lamar, mother of Easton, Katie Wollert of Greeley, siblings, Nick (Brooke) Palmer of Lamar, Lisa (Marshall) Wilkinson of Loveland, CO, maternal grandparents, Jerry and Marilyn Cavin of Colorado Springs, CO. He is also survived by countless aunts, uncles, other relatives and many friends.

Memorial contributions may be made to the Alan Palmer Memorial Fund in care of the funeral home office.

Services are under the direction of the Peacock Family.
To order memorial trees or send flowers to the family in memory of Alan M Palmer, please visit our flower store.